Zhumell Z8 vs Orion XT8 – Which Dobsonian Telescope is the better option?

Dobsonian telescopes were made famous by John Dobson and they are altazimuth-mounted telescopes that, in their use, have greatly increased the availability of telescopes, by size, to the inexperienced astronomer. Their simple designs allowed for low-cost production and for deep-sky object observation. Zhumell Z8 and Orion XT8 are such Dobsonians. Check out their review.

Hi, my name is Amir and I have been a telescope enthusiast for close to a decade now. Over the decade of working with telescopes, I have learnt more about them and grown my love for them in addition to astronomy. Through attending live forums and observatory sessions, I meet many like-minds and they always have questions for me. These questions aren’t always difficult for me to answer, but I often go into details, ensuring the interested party understands why a certain telescope operates the way it does, the features on it that make it so great among other things. That is why I am at an advantage to offer you my experienced opinion on these two Dobsonians.

What are the differences between the Zhumell Z8 and Orion XT8?

Zhummel Z8 vs. Orion XT8- How these telescopes compare

The 8” aperture of the Zhummel Z8 Dobsonian is large enough to allow for higher light grasp made possible by their primary parabolic mirror that greatly reduces issues such as spherical aberration making for clear and crisp observation of objects such as nebulas. It also comes with two eyepieces, 1.25” (9mm) and 2” (30mm). With the 9mm, you will get medium magnification power allowing you to see galaxies, planetary nebulae, wider double stars and a sizeable magnification to their features. The eye pieces are multi-coated which adds an ant-reflective effect for seamless imaging.

The XT8 features the same aperture, focal length and focal ratio of the Zhumell Z8. The major differences are in the magnification which is as a result of the eyepieces used in the XT8. This telescope comes with two 25mm Sirius Plossl eyepieces that are ideally provisions for eye-relief. These compound symmetrical eyepieces provide a 50% increased field of view. Together with the Shorty 2x Barlow lens that doubles magnification power of the other eyepieces, this telescope makes for even crispier celestial system imagery. 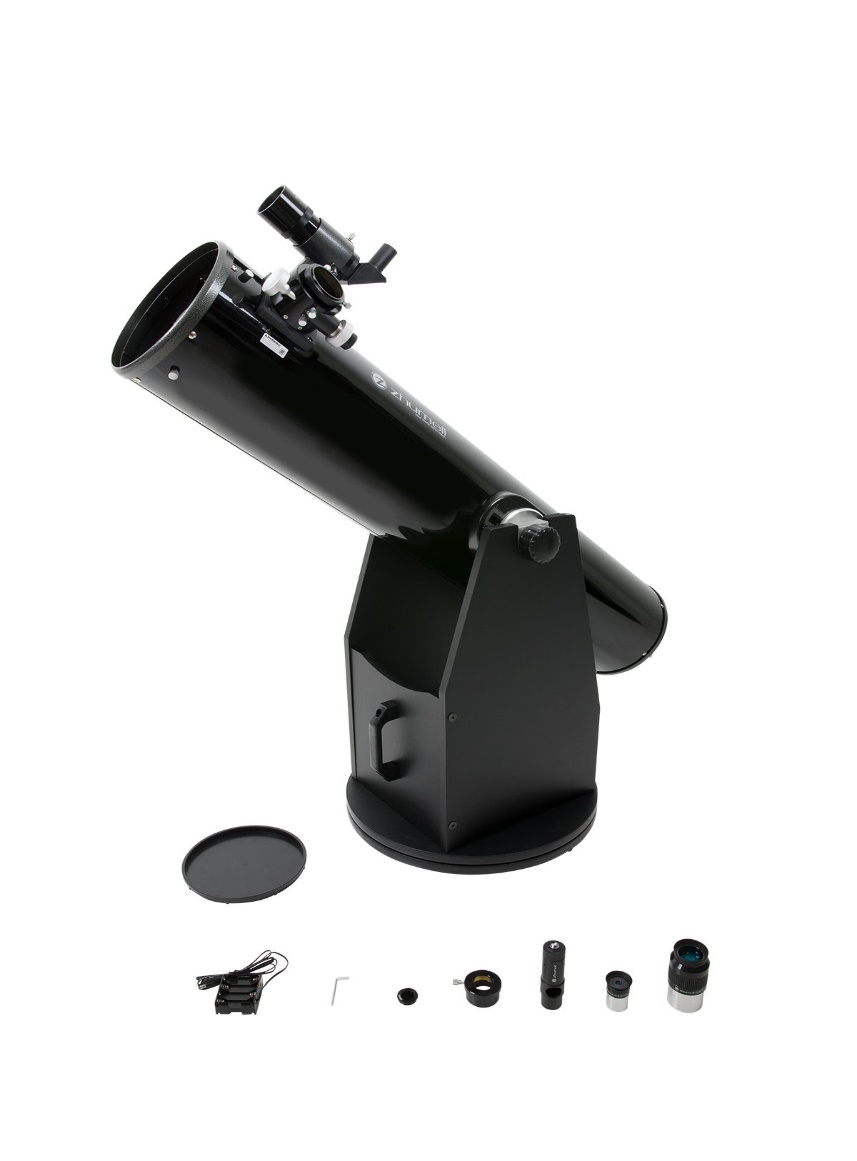 For the Z8, Zhumell took into consideration of their customer’s feedback, recommendations and suggestions on materials to be used, the design and the most desirable accessories they felt they needed. The Z8 does not disappoint because apart from having a great sized aperture and two eyepieces, they also included a Moon Filter which is beneficial for those Lunar lovers who want to cut off the glare and have better contrast imagery.

With the inclusion of a dual speed Crawford focuser with a 1:10 fine adjustment knob allowing for focus at high magnification. Even newbies will have a chance at some form of pro astronomy observation. Located on each side of the tube, Z8 also has adjustable ball Bearings that allow you to adjust tension and gain balance for superior altitude bearings.

A laser collimator also comes with the Z8 which ensures that your optics are perfectly aligned for the sharpest imagery. A cooling fan helps to keep your telescope at optimal temperatures at all times.

Another key must-have for telescopes and their users is the Finderscope that helps in pointing your telescope to targets up on high. Z8 thought of this and included an 8×50 Right Angle finder greatly enriching your experience. The Right Angle will let you see more stars and help you re-align planets more effortlessly.

Z8 is mounted on a Dobsinian Altazimuth mount that makes for really smooth movement of the telescope. The base of the board is of Ikea Particle quality and should be handled with some care. The Z8 base spins perfectly and has an adjustable knob at the base’s center. One must be carful at set-up to ensure the weight is not too much on one end which could crash and ruin your Dobsonian.

An instruction manual is included in the package to help you understand the set-up.

Lastly, the whole device can be broken down to two manageable pieces which makes this telescope ideal for vacations and a quick grab out the door. It may have to sit in your backseat though as its size is a too big for most car boots.

What can you see with the Zhumell Z8? 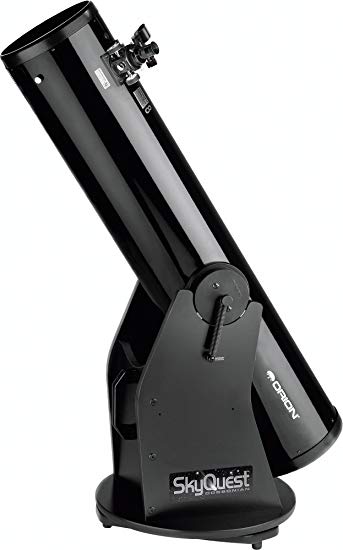 Marketed as a Dobsonian reflector, the 8-inch XT8 is one of Orion’s famous models. Great for the whole family, this telescope will give you plenty of reasons to go for camping just to sit back and enjoy taking turns on it.

Orion XT8 Dobsonian is a great telescope that can give you nightly opportunities to enjoy stargazing. Due to the wonderful mix of precision optics, simple mechanisms, and sturdiness. Planetary objects of significance like Mars, Jupiter and Saturn are brightly seen in the XT8 Classic, this allows you to have a deeper look at them. The 8″ aperture gathers enough substantial amounts of light further up in far-off space making for beautiful views of shimmering star clusters, dusty nebulas, and distant galaxies. This telescope is a great buy putting into consideration the great quality views achievable across an array of objects.

The Dobsonian design has a point and shoot simplicity as compared to a telescope on an equatorial mount. It just takes some practice before you and the family are scanning the skies like expert hobbyists. It’s a great recommendation for the amateur astronomer who seeks unabated adventure, this telescope has everything!

The XT8 Dobsonian has a 203mm diameter parabolic primary mirror that collects a great degree of photons. This way, your ability to see the nebulas dust lanes, hash-out the bright clusters and the much fainter structures on galaxies is greatly increased. The XT8 mirror gives sharp and true views with low to high magnifications. That’s accurate for good nights with clear conditions.

XT8’s Dobsonian’s mirror is enhanced in reflectivity coatings boosting its reflectivity to transmit much needed light to the 30mm eyepiece guaranteeing sharp and crisp views. The XT8 Dobsonian base is sturdy enough for the aperture.

The XT8 also comes with a smooth and approximate 2-inch Crayford focuser featuring a detachable adapter accepting either 1.25″ or 2″ lens. Ensuring adjustments are seamless, approximate, and free of delays and shifts regardless of the weight of accessories installed achieving targeted focus easily.

The included 1.25 -inch Orion 25mm Plossl eyepiece gives a 48x magnification with the XT8 Dobsonian telescope. Offering a wide 52° field of view, this Plossl eyepiece provides really crisp images of great contrast. Expanding your variations of magnifictaion can be done by buying additional wide-angle eyepieces of 1.25-inch or larger 2-inch focal lengths. These are sold separately.

After a fairly easy alignment procedure, use the Finder II view to approximately aim the XT8 Dobsonian telescope to the bright planets. How? After alignment, turn finderscope and look through the views tiny round viewing window to keep in view of the red laser signal, now keep adjusting the vertical and azimuth altitudes on what you are interested in seeing or observing more closely. Peek in the telescope’s eyepiece, there is it is!

What we absolutely love about XT8 is that it included the Starry Night app to keep informed about which constellations, planets, stars and deep-sky are visible at any day and time. Realistic simulators of the sky and useful features like virtual control of the scope, the interactive, easy to use Starry Night software helps plan your viewings and gives detailed information on what is visible. You would require PC compatible with Windows 10, or Macintosh.

Much-loved Orion XT8 telescope also comes with a collimation cap rather than a collimation laser which doesn’t do much to help the amateurs when it comes to mirror alignments. Dust caps keep the telescope aperture and focuser free from gathered dust while in storage.

Conveniently broken down to manageable pieces the XT8 Dobsonian is made for better support and storage. Unhinging the base allows you to remove the aperture. The optical tube of the XT8 weighs lightly and the base a little heavier. The total weight of the entire set-up at 41 lbs. gives the XT8 greater mobility to viewpoint.

This is an awesome Dobsonian with the capability to excite both the ardent amateurs and expert stargazers. Its sturdy design is guaranteed to remain in the family for many years to come.

What you can see with the Orion XT8

Verdict: Which is the better option? Zhumell Z8 or the Orion XT8?

I personally think the Orion XT8 is far more superior in build and in providing the expected end result.

The Zhumell drives a hard bargain with all the accessories that come with it that greatly add to the entire experience.

However, both are powerful Dobsonian optics that have similar optics and really great quality observation and construction endurance. The Zhumell Z8 is conveniently accessorized and it seems to be a favorite for many. For others, they feel the Orion XT8 tops the charts as the images are brighter and crispier than with the Z8.

Either way, both are made by reputable brands that have earned their customers’ trust. Check out their prices and make an informed decision. Have fun!

Will I get to see galaxies and nebulas with the XT8?

Yes of course! Besides Orion’s, I found a few other nebulas with it. Other than Andromeda, I saw the cigar and sombrero galaxies as well. I’m sure you will get more too. Although most were kind of faint, I had a badly polluted sky. I tried on a low magnification of course. If the conditions are right, maybe these objects would be even brighter. I think it really depends on the conditions. In a poor sky with less clarity, will have a hard time seeing them. Still this scope is the best you can get. Bang for the buck.

Hi guys, I’m new here, how do I power my XT8? Do I need a power tank so it doesn’t drain the batteries?

This is a manual telescope that just needs your direction to shoot for a target and it will give you that range of view. Very simply o set up and use. A grab-and-go definite for me.

Is the Z8 lens chromatic or apochromatic?

The Z8 is a masterpiece that strategically left out the lenses. This makes for clear images with no need for concern over aberrations. It also makes collimation a no-brainer and storage is great too!

Sky-Watcher vs Orion – who makes the most powerful telescopes