As a photographer, you always want to explore all sorts of instruments before you can settle on one model to carry forward your trade. It’s been 2 years since I developed an interest in astrophotography and since then, there have been many learning curbs. One of the biggest learning curves was when I decided to purchased a telescope for my budding astroimaging interest. During this process, I learnt a lot about telescopes and found two of Celestron’s 8 inch options that I think are great options for any one interested in picking up astrophotography. Here is a comparative review of Celestron NexStar evolution 8 vs Celestron NexStar 8se for further insight.

Because they belong to different Celestron lines, it’s only natural the Celestron Evolution 8 and NexStar 8SE have different exteriors. The 8SE hails from Celestron’s iconic orange tube series. This is one of their most beloved line of consumer telescopes that are not only user friendly but also equipped to meet performance expectations. Additionally the SE like is founded on its beginner friendly construction with advanced user features and capabilities. With this, SE line telescopes can serve a wider variety of users.

Alternatively, the Evolution 8 comes from Celestron’s High tech telescope line: Evolution. The instruments on this line are devised with high end technologies to engage advanced users without adding more complexities for beginners to deal with.

It’s difficult to discuss astrophotography without talking about optics on either device. Interestingly, these telescopes shave several specifications in that, they are both 8 inch aperture 2013mm focal length instruments with f/10 focal ratio each.

Celestron makes the Evolution 8 with brass worm gears and improved motors and still remains affordable. In fact, this model is equipped with great tracking accuracy, the result of which is impressive shots of deep space objects. Additionally, the Evolution 8 is compatible with high tech accessories which help generate detailed astrophotos. Thanks to the Schmidt Cassegrain system it shares with the NexStar 8se, you will impressive bright sharp views which you may then photograph.

The NexStar 8SE on the other hand, isn’t as astrophotography featured as the former. However, it does come with excellent compatibility with great accessories for astrophotography purposes. For instance, using Celestron recommended Fastart Tech, you can take wide field images. Alternatively, planetary images look best when the 8SE is paired with one of Celestron’s Skyris Cameras.

Some people believe that a great telescope is one you can easily move around and set up at different location. To do this, the instrument not only needs to have the right design that allows you to easily disassemble it or carry it around. For this reason, the weight of your telescope should matter a lot. The NexStar Evolution 8 weighs 40.5 lbs when fully assembled, it isn’t the lightest instrument but it is within acceptable ranges for high performance consumer telescopes. On the other hand, the NexStar 8SE is 33lbs, that’s 7.5lbs lighter than the Evolution 8. While seemingly not significant, this difference in weight could heavenly influence portability and convenience of your device. 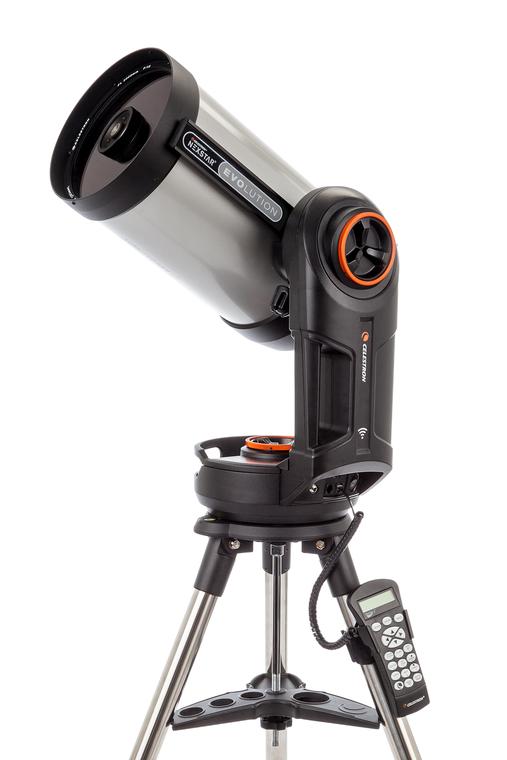 The Celestron NexStar Evolution 8 is a capable Schmidt Cassegrain that is one of the few members of the NexStar Evolution series. Using this 8 inch aperture telescope, you can access various features including but not limited to quality optics, remote control and even Wi-Fi access. Some of the features that make this device so capable include the following:

This instrument has some pretty standard features including the following specifications for its optics: an 8 inch aperture /203.2 mm, a 20132mm focal length with an f/10 ratio. These are similar to several other Celestron Telescopes from different series. However, his line takes the Celestron NexStar Evolution 8 to a whole other level. With the Schmidt Cassegrain design used on this telescope can achieve magnifications of 50X on the 40mm eyepiece and 156X on the 13mm eyepiece. The secondary mirror on this SCT causes secondary mirror obstruction within this system in 9.77% by are or 31% by diameter. Luckily, the optics on this telescope utilize Celestron’s high performance optical coating to improve performance of optical surfaces. This Star Bright XLT optical coating is a unique blend of pure materials used to supplement optics function.

Contained within the chic sliver-grey Aluminum17 inch optical tube, you can rely on the optics system on this telescope to reach advanced levels.

With the in built wireless network that you can explore the skies and the universe in general from your android or iOS. As a bonus, the Sky Align feature is built into the app allowing you to set up comfortably from your phone and quite conveniently using the computerized aligning power thanks to Sky Align. If you are worried about your phone or devices switching off during a session, you can connect them via USB to the Evolution 8. This way, they remain running throughout the session. The best part about this is that this battery has the capacity to last up to 10 hrs.

The Celestron NexStar Evolution 8 uses the basic Alt-Az computerized mount with the revolutionary single fork arm. There are some new additions to the mount i.e clamps which you can utilize to trace and locate objects across the sky. Once assembled, this telescope weighs about 40.5lbs which is great news for anyone looking to move around their Evolution 8 telescope. There are additional features in play that ensure that this telescope is similarly as beginner user friendly as it is advanced. The telescope is mounted on the classic steel tripod that Celestron telescopes come with. This tripod has a 31.75mm diameter to sufficiently support the instruments load.

The Celestron NexStar Evolution 8 is powered by 9 internal 6V, or 4 5Ah LiFePO4 batteries (Lithium-Iron Phosphate). Using this inbuilt battery, the first of many, you can run sessions that extend to even 10 hrs. The biggest selling point of the Evolution 8 is its advanced capabilities without neglecting beginners’ needs.

What can you see with the Celestron NexStar evolution 8? 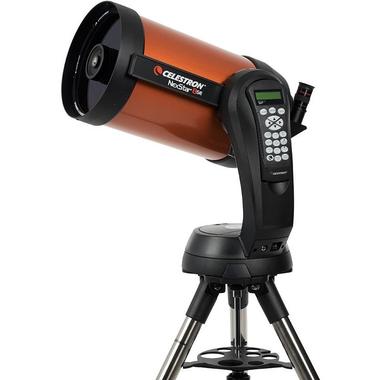 It might be difficult to objectively look at this telescope due to all the praise and its long standing history as a beloved instrument, but the 8SE is not perfect. Where are some of the features that make this telescope so great and some of them, not so much.

Celestron markets the NexStar 8SE as the world’s most beloved telescope, and rightfully so. This telescope is designed with the utmost care to ensure the result is a high performance great telescope. Specifically, the 8SE is modeled with an 8 inch aperture, hence the 8 in the name. The optics on the NexStar 8SE include the following: an 8 inch aperture with a 2032mm focal length and f/10 focal ratio, you can rely on this device to effectively gather light to help you see even faint objects. You can achieve magnification of up to 81X on the eyepiece with this telescope. Because it is a Schmidt Cassegrain optical style telescope, it is reliable in properly gathering light and production of bright crisp images with minimal issues. All this is contained in its classic 17 inch orange optical tube and mounted using Celestron’s reliable mounting system.

Theoretically speaking, the 8SE has the power to reach 480X magnification which is its highest useful magnification power and 29X as its lowest useful magnification. Additionally, this system experiences a 9.77% by area, secondary mirror obstruction. Its optical surfaces are coated using Celestron’s unique and highly effective optical coating. With this Star Bright XLT coat, the optics can perform at their best regardless of the secondary obstruction present.

Beginners and Advanced users will enjoy using this telescope because it makes accommodations for all its types of users. The basic Alt-Az basic mount design with the GoTo tracking which is motorized, results in reliable tracking and location on your telescope. Because the 8SE comes with access to a database with 40k celestial objects, there is no way you will get bored with this telescope. Thanks to Celestron’s unique single arm fork design, this telescope is both portable and quite easy to set up. You can breakdown this instrument to even more compact pieces if you wish: do not worry; reassembling it is just as easy.

Anyone can align the 8SE quite easily as the process is considerably painless and is over within a matter of minutes. Utilizing the Sky Align technology, the scope can quickly align itself. To achieve this, you will have to center 3 bright objects in your piece or use the Star Sense Auto Align features which doesn’t require you to do anything as the alignment is automatic. If you like, you may take advantage of the advanced features that make this device so high-tech. For instance, you can use SkyQ to control the telescope using or even incorporate GPS functionality using the Sky Sync tech.

What you can see with the NexStar 8SE

Based on their features and capabilities, the Celestron Evolution 8 is the better 8 inch aperture telescope for astroimaging. There are some prospects with the 8SE, however, the Evolution 8 uses better technologies and a better fit for use with various accessories for astrophotography.

This is the art of capturing images of celestial bodies observed via telescopes onto print or digital media. Often it requires a special set of equipment including cameras among other accessories to make the process possible or even successful.

Can I use the NexStar Evolution for astrophotography?

Yes you can. In fact, Celestron intentionally incorporates various technologies and compatibility features on the NexStar Evolution 8 to ensure you can effectively take astrophotos.

Is NexStar 8SE capable of astrophotography?

Yes: using the Celestron NexStar 8SE, you can capture great planetary images among other celestial objects. This model is compatible with various accessories that allow you to utilize it during astrophotography sessions. Additionally, the 8SE has a large enough aperture to accommodate astrophotography.