Interested in a Celestron telescope but don’t know where to start? Do not worry, Celestron has a bunch of great telescope options, to suit different needs beginners may have. The SLT line is particularly beginner friendly and a good choice for anyone’s first telescope. Take a look at Celestron NexStar 114 SLT VS Celestron NexStar 130 SLT which will compare two of the SLT lines’ favorites especially for beginner users.

One of the most frightening things I’ve ever had to do was purchase my first telescope. Even though it was a used instrument with some flaws, it took me days and many sleepless nights to decide that I wanted it. It has been 14 years since then, but my love and appreciation for telescopes has only grown. In fact, it drove me to pursue and teach college level physics where I run the astronomy club. I often encourage students seeking to make a major telescope purchase to consider many things and many times, guide them though the search and selection process. The most difficult part about finding the right telescope is combing through all the information to ensure the features are right for you. Among Celestron’s various series of telescopes, the SLT is a great place for beginners and a popular starting point for many of my students. The line carries easy to use, but well equipped instruments any beginner will not only enjoy but also find quite reliable. The popular 114 SLT and 130 SLT both from this line are going to be the focus of this view. I will be comparing each model to the other, determine the differences between both options and thoroughly review what either telescope has to offer. Here is Celestron NexStar 114 SLT VS Celestron NexStar 130 SLT for further insight.

Both the 114 and 130 SLT are Newtonian style telescopes that operate by reflecting gathered light to allow the user to view the synthesized image. If you are new to telescopes, then you might not be aware of these existing differences between the various types of telescopes there are. For this particular case, you need only know that telescopes are divided into 3 basic groups using their operating principle as the distinguishing factors. These groups include refractor style, reflector style and compound style telescopes.

While they may be similar in that sense, the 114 and 130 SLT have quite distinct optics. Important numbers such as the aperture, focal length and focal ratio on either option varies greatly. The Celestron NexStar 114 SLT for instance has a 114mm (4.48″) Aperture, with a 450mm Focal length, and f/3.95 Focal ratio. Alternatively, the Celestron NexStar 130 SLT has a 130mm Aperture, 1500mm Focal length, and f/12.5 Focal ratio. These differences will influence optical capabilities in terms of what celestial objects you can see and how clearly you can see them.

TIP: It is important to know that in many instances, a change in aperture size will affect overall weight of the telescope. Because the 130 SLT has a larger aperture than the 114 SLT, it is slightly heavier than the 114 SLT. The best telescope for beginners is one which anybody can set up, or move about with ease. Luckily, both the 114 SLT and 130 SLT are compact, easy to use lightweight instruments. 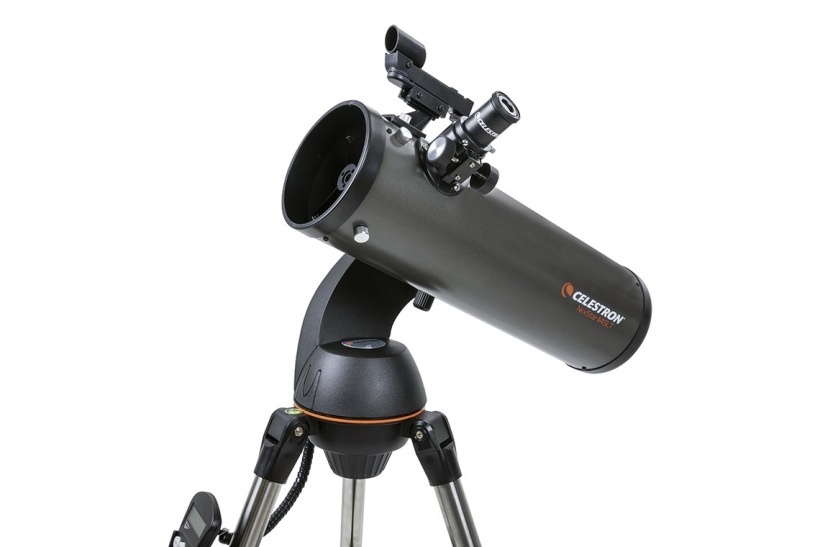 This is a high quality optics all black Newtonian style computerized telescope from Celestron SLT, Star Locating Telescope line. It is enabled with some great features that make it so much better that preceding instruments. Here are some of these features that make the Celestron NexStar 114 SLT a good telescope.

First off, the 114 SLT affordable but very effective telescope comes with some of Celestron’s most popular features and additions including the classing Alt-Az mount with GoTo capabilities. Using this computerized Alt-Az mount and their revolutionary single fork arm, this instrument introduces convenience to astronomy in many different ways. For example, you can expect easy object tracking thanks to this mount. Additionally, the mount is enabled with quality features such as the Sky Align technology. Celestron’s Star Align Tech that ensures easy alignment by pressing one button. In order to align your telescope with Star Align, you must center 3 bright objects on the eyepiece and press the align button; after which the telescope will be able to triangulate its location and automatically find other objects based on this data. You will also receive the standard sturdy stainless steel tripod with this telescope. The tripod is adjustable and comes preassembled, making set ups tool free and quite simple to deal with. This is great news especially for complete novices to the set up and alignment stages

This instrument is made with quality optics and has the following optical system specifications: 114mm/4.48 inch aperture on the primary mirror, a 450mm focal legth with a f/3.95 focal ratio. Using this telescope, you can achieve maginifications of 18X using the 25mm eyepiece and 50X using te 9mm eyepiece. Due to the nature of this system, the secondary mirror obstruction lies at 9% by area and 30% by diameter. This is significantly smaller compared to other optical systems. To ensure the optics are perfoming at prime conditions, Celestron uses Aluminum with SiO2 as the coating for the 114 SLT optics. These are housed in an 18 inch chic all-black optical tube. Because of the compact Newtonian style design used on this model, it is quite convenient to haul around. The singe fork arm mount makes it easy to take the device apart and but it back together stress free.

Powered by the standard 8 AA batteries or recommended alternative 12VDC, the Celestron NexStar 114 SLT can run for long sessions without issues. With this purchase, you can access the highly regarded starry night astronomy software which you may use for a variety of purposes. Additionally, you may access the NexStar+ database with this telescope purchase that contains over 40K celestial objects: all of which are catalogued for easy maneuvering or even learning in case you are a beginner.

What can you see with the Celestron NexStar 114 SLT? 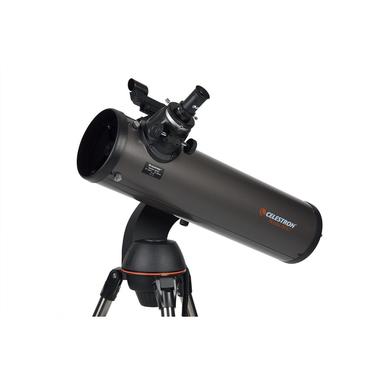 Celestron designed and markets the 130 SLT as a Newtonian Reflector telescope designed for powerful, yet simple use. It is part of the Celestron NexStar (SLT) Star Location Telescope. If you know some Celestron series history, then you are familiar with other models within this series. Because of the 130mm aperture on this model, it is known as the 130 SLT. In fact; the 130 SLT is the largest in its SLT telescope series. Among the features that make this telescope so wonderful include the following.

This model incorporates various basic and complex elements into its design, making it a great option for anyone who just started sky gazing. Additionally, it is capable enough to keep you interested even when you are past the beginner level, moving on to intermediate territories. The 130 SLT boasts a user friendly yet capable system that is mounted on its sturdy computerized Altitude Azimuth mount with the iconic single form arm mount. Because it comes with an easy to assemble set up, you can have this telescope ready for use as you please. Other Celestron hit features that appear on the SLT 130 include the

Specifications for this devices optics include 130mm aperture on the primary mirror, a 650mm focal length with a f/5 focal ratio. Using this telescope, you can achieve magnifications of 26X using the 20mm eyepiece and 72X using the 9mm eyepiece. Due to the nature of this system, the secondary mirror obstruction lies at 11% by area and 33% by diameter. This is significantly smaller compared to other optical systems. To ensure the optics are performing at prime conditions, Celestron uses Aluminum optical coating on the 130 SLT optics.

With access to the NexStar+ database includes over 600 galaxies and more. When you are new to star gazing, it might be difficult o choose what you want to see but you can rely on the Sky Tour feature which generates an entire list of the best objects to view at your time and location. Powered by 8 double A batteries which provides enough energy for operation.

Accessory-wise, you will receive a red dot finder scope two eyepieces, 20mm and 9mm, to add varying magnification for a difference in observing. Additionally, you receive a star diagonal which provides a right side you for a more comfortable experience.

Like with many Celestron NexStar purchases, you will receive access to the Starry night Software which will teach you about the night sky and its celestial bodies. The 130 SLT is built for both terrestrial and celestial observing.

Why the SLT line of telescopes is specifically designed to cater to beginners and accommodate many other users, the Celestron 114 SLT is the better SLT instrument for beginners. It has better beginner friendly features and would facilitate their growth better than the 130 SLT would.

What does SLT mean?

According to Celestron, the makers of both these telescopes, SLT stands for STAR LOCATION TELESCOPE. It is a line of innovative computerized telescopes designed not only to provide high quality optics but to engage the user at different levels using a friendly interface. Both the Celestron 114 and 130 belong to the SLT line of telescopes.

What can I see with Celestron NexStar 130 SLT?

Primarily, the 130 SLT is a terrestrial and celestial telescope. Apart from planets and other planetary features like their respective moons or bands and rings, you can use the SLT 130 couple with other efficient instruments to view and photograph objects in deep space easily.

These are telescopes utilizing various technologies to make the alignment, tracking or even location of celestial objects easy and convenient. Both the 114 and 130 SLT are computerized telescopes where you can align your telescope by the press of a button or even tract various celestial objects quite easily, and much more. This is unlike manual instruments that require an entire process dedicated to the set up.